Upper Mustang trek via Teri La Pass (5595m) and Nar Phu valley is one of the popular routes in the Annapurna region. This is an adventurous and challenging trek and offers a combination of two most restricted areas Upper Mustang and Nar Phu Valley crossing through beautiful Teri La pass. This trek offers the visitors a chance to explore the ancient caves, monasteries, medieval villages, breathtaking valleys, and to get an insight of Buddhist art and culture.

The trek begins from Jomsom and finishes in Jagat. The trail goes through pine woods, streams, cascades, and a few suspension spans. Amid the trek, you visit the antiquated religious communities, for example, Rangchung Cave Monastery, Ghar Gompa, Luri Cave Monastery, Thukchen Monastery, and Lakhang Monastery. You will investigate the memorable city of Lo-Manthang and old towns of Nar and Phu in the Nar Phu Valley in the wake of intersection the sensational mountain pass, Teri-La (5595m). This trek bundle not just offers you the chance to see the snowcapped mountain pinnacles, for example, Dhaulagiri (8167m), Nilgiri (7061m), Lamjung Himal (6893m,) and Annapurna II (7937m) yet in addition, permits to watch Buddhist culture and nearby way of life of the Himalayas.

Day 4: Trek from Kagbeni to Chele

Day 5: Trek from Chele to Ghiling

Day 6: Trek from Ghiling to Dhakmar

Day 7: Trek from Dhakmar to Lo-Manthang

Day 9: Trek from Lo-Manthang to Yara

Day 11: Trek from Yara to Tangge

Day 14: Trek from Samena Khola to Teri-La BC

Day 23: Trek from Meta to Koto

Day 24: Trek from Koto to Dharapani

Day 25: Trek from Dharapani to Jagat

Day 26: Drive from Jagat to Kathmandu

Cost and dates
We do small group trek or private trip as your request.
For quick information contact us at WhatsApp/Viber +977-9841815039

This trip can get redesigned or redeveloped as per your taste, for more information please e-mail us at mountainsunvalley@gmail.com

Day 1  Arrival in Kathmandu
We will welcome you at the airport, and then transfer you to the hotel.

Day 2  Fly to Pokhara
Today, you will take the afternoon flight to Pokhara. It will be a scenic 20 minutes flight. You can relax by the lakeside in the evening.

Day 3  Fly to Jomsom & trek to Kagbeni.
From Pokhara, you take an early morning flight to Jomsom. After some rest at Jomsom, the trek begins to Kagbeni. En route, you can enjoy the views of Tukuche, Dhaulagiri, and Nilgiri.

Day 4  Trek from Kagbeni to Chele

Follow the trail of the Kali Gandaki River and climb up several ridges in the north. Then you arrive at the Gurung village of Tangbe. Then, you leave Kali Gandaki valley and climb steeply to reach Chele.

Day 5  Trek from Chele to Ghiling

Cross the stream and descend down to arrive at Rangchung Cave Monastery. After a gradual climb from Syangboche, you descend to arrive in Ghiling village.

Day 6  Trek from Ghiling to Dhakmar

Passing through the Ghiling village, you move on the Nyi-La Pass. Moving ahead, you cross the longest Mani wall in Mustang and then you cross a stream. Climb up a ridge and cross a valley to arrive in Dhakmar.

Day 7  Trek from Dhakmar to Lo-Manthang

Ascend a steep eroded gully and pass through some alpine meadows. Then, climb a ridge and keep descending till Ghar Gompa. You walk further to cross Marang–La Pass before descending and following the trail to get to the fortress city of Lo-Manthang.

Day 9  Trek from Lo-Manthang to Yara

Today, you visit the Luri Cave Monastery, which dates back to the 14thcentury. The lower caves have beautiful white stupas and painted walls. You can explore the ancient paintings of Shakyamuni Buddha and Padmasambhava.

Day 11  Trek from Yara to Tangge

You start off early and make a steep ascend. Then, you descend steeply until you reach Dhechyang Khola. After crossing the river, the trail ascends and passes through the grasslands. The trail then drops rapidly to Tangge village.

Day 12  Trek from Tangge to Yak Kharka
There aren’t many villages on this route. You may see some temporary huts of yak herders in Yak Kharka.

This will comparatively be an easier trek as you pass through the gentle paced flat terrain. There is no vegetation as you move ahead but the highlight of the day will be the lively riverbank of Samena Khola. You will come across some old cultivated lands before arriving at Samena Khola.

Day 14  Trek from Samena Khola to Teri-La BC

You leave Samena Khola and follow the trail that heads upward. This trail passes through sparsely vegetated areas alongside Yak Khola, following which you reach Teri-La Base Camp. You can enjoy the view of Teri Himal (5935m) along with the views of other peaks as you rest in Teri-La Base Camp.

You cross Yak Kharka and follow the trails of Rijung Chwa Khola that flows on the foot of Teri Himal (5935m). Walking on moraine on a steep trail, you arrive in Teri-La High Camp. From the camp, you get an unobstructed view of Damodar Himal and Purung Himal ranges.

The trek starts early today with a target to reach the top of the pass by the time of sunrise. From the top, you can view the Himalayan ranges of Dhaulagiri, Annapurna, and Purkung.

You follow the downhill track and continue the trek through the flat terrain of Nar Phu Valley to reach Labse Khola.

Day 18  Trek from Labse Khola to Yak Kharka
The trek continues through the wilderness to Yak Kharka. Following Labse Khola downstream, you reach Yak Kharka. There are only a few temporary shepherd huts. It is a lush pastureland that is used for cattle grazing, especially the yaks. 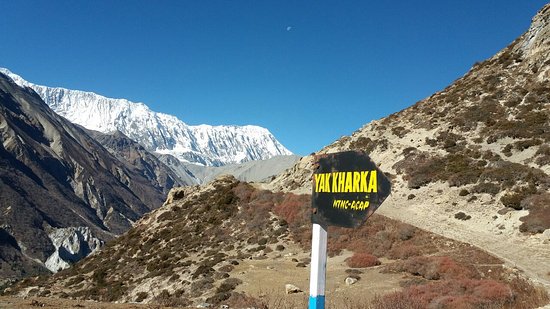 Follow the trail downhill for around 7 hours to reach Nar Gaon. There are many Buddhist monasteries to visit here. You can interact with the locals and learn about their one of a kind culture in Nar.

Today will be a downhill trek. You walk past the Mani wall and continue to walk downhill to Phu River.

Day 21  Trek from Kyang to Phu Gaon
Walk past the Chortens and streams that arise from the high Himalayas. Walking on a rocky path, you follow the trails of Phu River and then cross the river to in Phu Gaon. There is Lakhang Monastery, also known as the blessed house of gods, in Phu which is one of the oldest monasteries in the world.

You pass through several streams and suspension bridges. During this trek, you can enjoy the spectacular views of Lamjung Himal (6893 m) and Annapurna II (7937m).

Day 23  Trek from Meta to Koto

It will be a downhill walk and comparatively an easier trek to the settlement of Koto. You walk through the pine forests passing many streams and picturesque waterfalls near Dharmashala.You get an enchanting view of Annapurna II (7937m) from Koto.

Day 24  Trek from Koto to Dharapani

The trail to Dharapani follows Marsyangdi River downstream, passing through pine forests and small villages. On the way, you reach a ridge from where you can get excellent views of Annapurna II (7937m).

Day 25  Trek from Dharapani to Jagat

After reaching Tal, the trail drops down to the river. Then you climb up through the dense forest and cross another suspension bridge. Continue on the trail and reach Jagat.

Day 26  Drive from Jagat to Kathmandu
The trek ends in Jagat. You drive back to Kathmandu in a private jeep. You can enjoy the views of the beautiful landscapes, mountains, and villages on the way back.

Day 27  Departure to International Airport
Our company representative will take you to the airport 3 hours before your flight schedule.

The trek  can be redesigned or redeveloped as per your taste, For more information please e-mail us at mountainsunvalley@gmail.com

1. What preparations should I make before trekking?
It is always a good idea to involve yourself in doing physical exercises before trekking. Not that you have to be all athletic and muscular to trek. An average level of physical fitness will make the journey less stressful.

2.Is drinking water easily available?
Availability of drinking water is not the problem. The problem is the cost of it at higher altitude. As you gain height, the price of water rises up to 2-3$ per liter.

An alternative way of getting drinking water is by having your water bottles filled in tea houses. Tea houses will provide you boiled water for about 1$ per liter. They are completely safe for drinking.

3.What kind of food is available during trekking?
Food is not of any concern while trekking. You will get all kinds of cuisines. For breakfast, tea houses will provide you with eggs cooked in your preferred style along with pan cakes, bread butter, roti, and so on.
Various other dishes like pizza, pasta, momo, chowmein and many more are also available. The most preferred dish is Dal Bhaat. It is a typical Nepali meal. Rice is served with vegetable curry, lentils, tomato chutney and meat curry.

4. What are the risks associated with trekking?
Trekking is an extreme sport and does come with a lot of risks. Some unavoidable risks are avalanche, heavy rainfall, earthquake, landslide and other such natural calamities.

You might fall and injure yourself or catch some viral flue. The deadliest risk of trekking is AMS or Acute Mountain Sickness. This sickness occurs when a great altitude is gained and the body fails to adjust to the changing pressures associated with it. Anyone can fall a victim of the sickness and if not treated in time, it can be fatal.

5. Do I need a guide/porter to trek?
There is no such hard and fast rule that you must have one. But it is highly advisable to travel with them. Some of the treks cannot be trekked without a guide most of them are the restricted ones.

A guide is someone who will help you with navigations. He will also have a better idea about the places to live in and eat at can negotiated prices for you. They will also help you during medical emergencies.

Dolpo to Jomsom via GHT Route