Dolpo had remained a restricted zone for foreign trekkers until a few years back. With the decision of the Nepal government to open this area for trekking this once elusive area has become a hotspot for trekkers visiting Nepal. Dolpo has retained most of its traditions and cultures. Time seems to stand still for people living in this area. They follow the same centuries old traditions and cultures and wear costumes that have seen no changes with the passage of time.

Day 3: Pokhara to Beni to Durbang by jeep

Day 32: Juphal to Nepalgunj/ flight and Nepalgunj to Kathmandu/ flight

This trip can be redesigned or redeveloped as per your taste, For more information please e-mail us at mountainsunvalley@gmail.com

Cost and dates
We do small group trek or private trip as your request.
For quick information / contact us at whatsapp/viber + 977 9841815039
Or Drop us inquiry at mountainsunvalley@gmail.com

Day 1: Arrival in Kathmandu
Today we will welcome you at the airport and drop you to your hotel.

Day 3: Pokhara to Beni to Durbang by jeep
Today we drive from pokhara to Durbang .We get a panoramic view of Annapurna South, Machhapuchre, green hills, terraced fields and villages. Day 7: Gurjaghat to Dhorpatan (2830m)/ 6-7 hrs
From Gurjaghat the trail goes through pine and juniper forest. The place has apple orchards and fields of wheat, buck wheat, maize and potatoes growing in terraces. One of the most significant features about this place is that anyone can go for hunting by paying certain fees to the Government authority.

We head uphill towards Phagune Pass, leaving Dhorpatan. On the way we pass grassland and sparse forests.

Day 9: Phagune Phedi to Thankur
Today we go through Phagune Pass, which is surrounded by green hills and we can see distant mountain top villages.

Day 11: Tatopani to Dhule (3300m)
From Tatopani the trail stars to ascend through some villages and school.. Dhule is a temporary settlement of the hotelers. 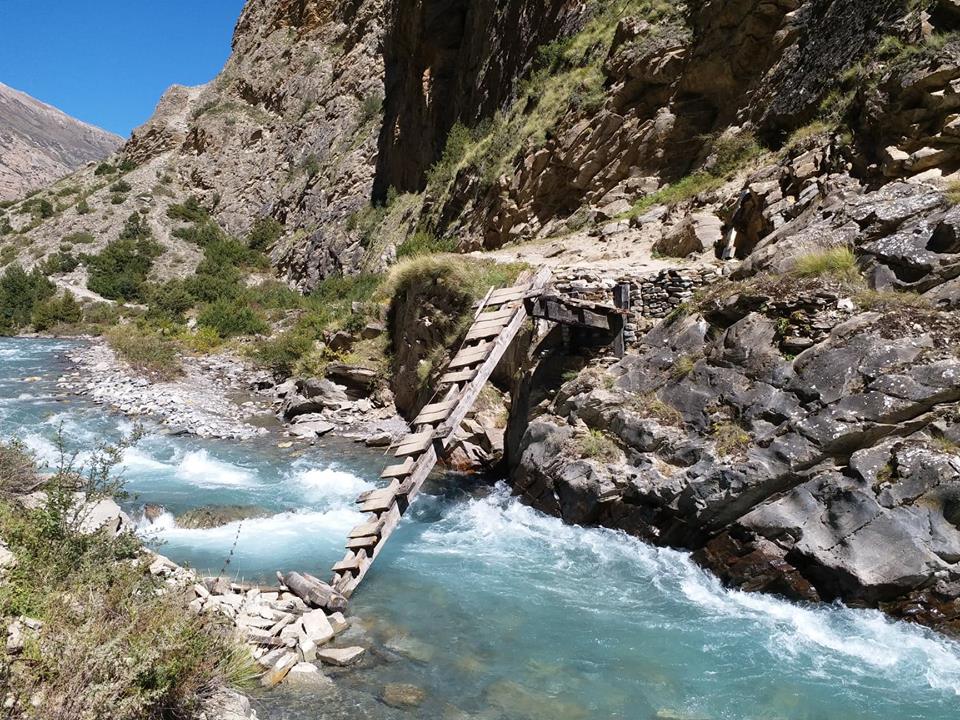 Today the trail goes ascending for near about one hour then the trail goes straight. We can see some mountains and hills. There are some cattle shades on the way.

Day 13: Seng khola to Purbang
From Sengkhola the trail again starts to ascend towards Puphal Tal (small lake). After walking for few hours the trail descends till Purbang.

Day 14: Purbang to Sahartara (2600m)
From Purbang we head towads Jangla pass. From Jangla pass we can see Kanjirowa and Norbukang of Dolpo. Crossing the pass the trail descends towards. Shartara is the village of Magars, where the people speak Kaike dialect. We will make the camp just below the village, the place is called Lingdo.

Day 15: Sahartara to Lahini (2600m)
From sahartara we follow a trail by the bank of the river till we reach a large and green valley. Trekking en route from the village of Khani gaon to Lahini we get to see musk deer bounding away in the midst of juniper and pine forest.

From Lahini the trail becomes narrow and adventurous as we walk through in landslide and avalanches area. We go little further then Nawarpani and set up camp for the day.

Day 17: Nawarpani to Dho Tarap (4040m)
Today we approach the most difficult and dangerous part of the trek. The valley narrows, and we approach deep gorges and cross innumerable small bridges. We follow a path that is carved out of a rocky cliffside. Following an adventurous trail we reach Dho Tarap.

Day 18: Dho Tarap- rest day
Today we spend a rest day at Dho Tarap. There are chortens, mani walls and monasteries. We will take a nature tour and enjoy traditional dances and songs. 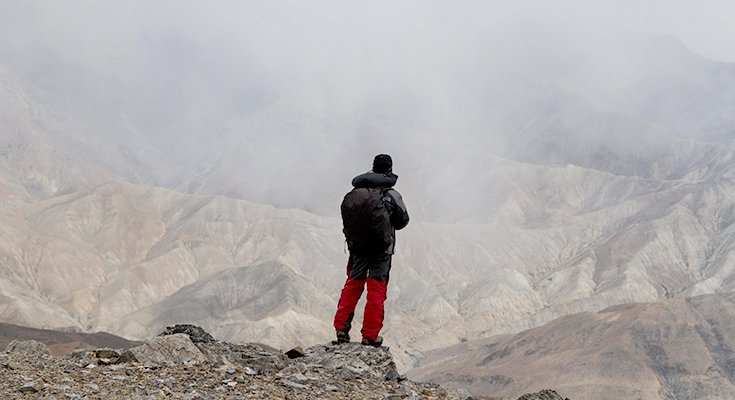 After visiting all the gompas and Chorten in Tarap valley we take the the trail that climbs up through grassy meadows filled with wild flowers to reach to Numala base camp. From the base camp we get a beautiful view of the distant Tibetan mountains and upper Tarap valley. 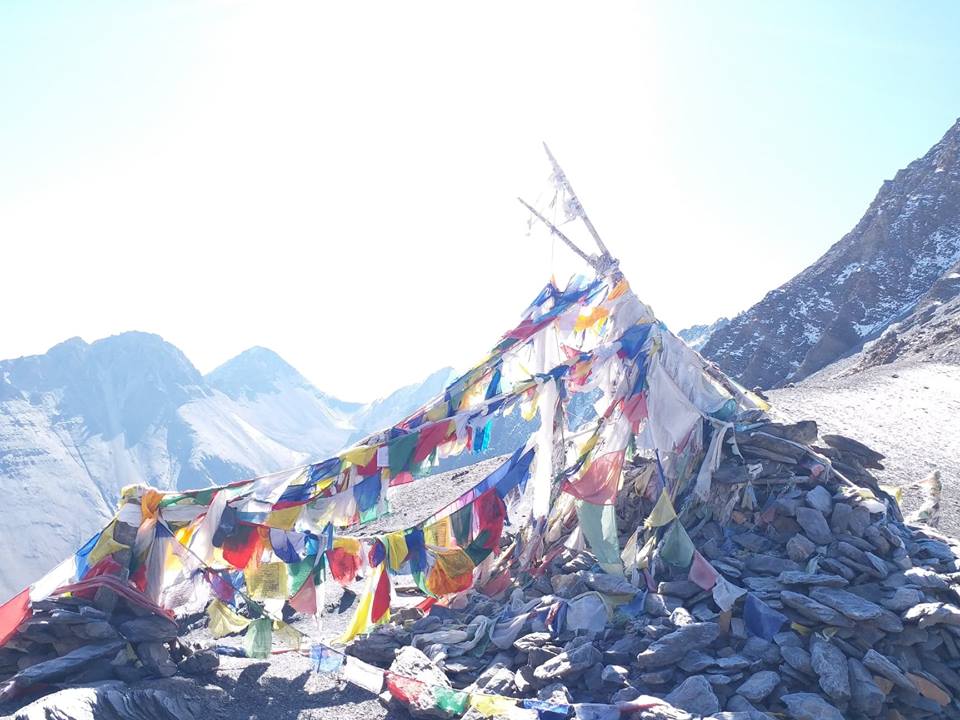 We make our way to Yak Kharka via Bagala Pass. From the pass we get to enjoy the beautiful view of Kanjiroba massif. After Baga La the trails turn gentle down all the way to Yak Kharka. Yak Kharka is open grassland and grazing ground for yaks and sheep.

Day 22: Yak Kharka to Ringmo to Phoksundo Lake/ 7hrs
The trek to Phoksondo Lake (3728m.) via Ringmo (3730m.) takes about seven hours. After crossing a wooden bridge we reach our destination. The big village lying at the bank of this lake is quite rich in Buddhist culture as there are monasteries, chortens, mani walls, shops, prayer flags, hotels, lodges, terraces and so on.

Day 23: Phoksundo Lake- Rest Day
Today we explore the area around the magnificent Phoksundo Lake. The lake is famous for its magnificent turquoise color and spectacular scenery. Many beautiful glaciers can be found near and above the lake area. There are many monasteries (Gompas ) and Bon-po religious sites at the park and we spend our time visiting some of these. 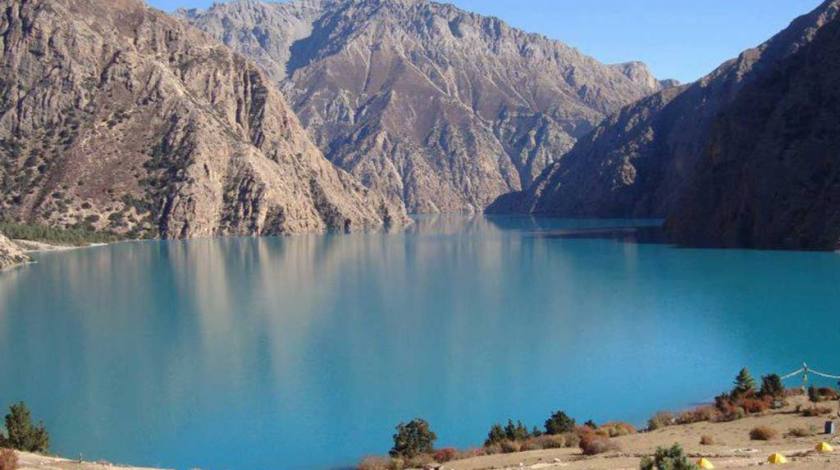 Day 25: Pungmo to Lasa
From Pungmo the goes straight through jungle up to the place called lasha. The the trail goes ascending towards Lasa through open land surrounded by rock mountains. We can see some mountains from the trail. We make our camp at Lasa for the night.

Day 27: Kagmara Phedi to Toijum
Today the trail goes straight. After walking for few hours we will reach at a wooden bridge, from where the trail goes through thin forest up to Toijum. There is one army camp too.

Day 28: Toijum to Kaingaon
From Toijum the trail goes through the forest of walnuts. Walking through the walnut forest we come to a village called Hurikot. There is one Bon monastery too. Leaving this village behind we reach to Kaingaon for the night rest.

Day 29: Kaingaon to Ghodakhor
Today it will be a pleasant walk through the jungle of Pine and Silverbirch though the trail winding uphill. Then we reach a small pass called Balangra. Crossing Balangra we go down hill to a place called Ghodakhor for the night stop.

Day 30: Ghodakhor to Tripurakot
Today the trail goes slightly descending through several villages. On this trail we can observe mostly the Hindu culture and tradition. We reach Tripurakot the holy temple of Hindus. It is renowned mostly within Hindus. 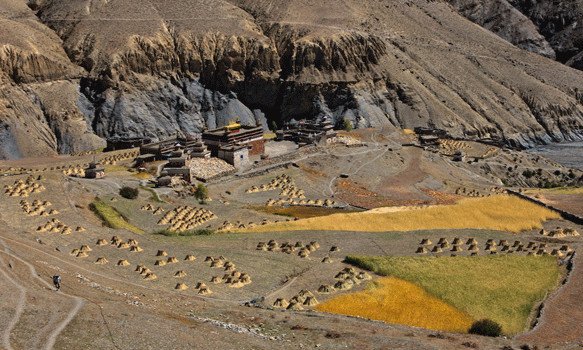 Leaving Tripurakot today we cross a suspension bridge and go through some small cluster of human settlement. We reach a place called Bhitti then the trail starts to ascend towards Juphal through the village of Motipur.

Day 33: Departure
Today is your last day in Nepal, we will drop yo to the airport and wave you goodbye.

This trek can be redesigned or redeveloped as per your taste, For more information please e-mail us at mountainsunvalley@gmail.com

What will I eat in the mountains?
For breakfast you have the option of porridge, fruit, omelettes, pancakes, toast with fried eggs, or tsampa (Tibetan porridge). For lunch and dinner you have the option of dahl batt (a tasty staple that consists of rice, a lentil soup, pickled vegetables, and curried potatoes), curried potatoes, pasta, spring rolls, lasagne, momo dumplings, or stir fry. It is not recommended to eat meat in the mountains.

Weight limits for internal flights?
If you are flying internally in Nepal (Everest Trek and Annapurna Circuit) there is a 12kg weight limit per person and this is the total weight of both the hand luggage and the checked in luggage.

Do I need adventure travel insurance?
It is important that you have adequate travel insurance that covers helicopter airlifts whilst trekking. The need for a helicopter is unlikely, but the mountains are remote and not accessible by car. It is essential that you get insurance for the altitude of your trek as some companies only cover treks to only 2000m or 4000m.